You’re an American. Naturally, you have piles of t-shirts you want to give away. They are basically junk to you, bearing insignia from your company’s annual picnic, a walk-a-thon, a phone-a-thon, or any number of other mildly important events where people passed out new t-shirts like napkins. You only saved them with a vague idea of a time when you’d need to paint your house or overhaul your garden. But a few years have gone by and the shirts are taking over the space in your closet for the new clothes you got for Christmas. So, it’s time for them to go to the Salvation Army.

The t-shirt you just re-gifted, the one that says,”Garcia Family Reunion Bear Valley Ranch 2008,” will probably not end up on the back of a homeless person in a New York subway. Rather, you’ll be more likely to find it across the Atlantic, on the model-thin frame of an African woman, who in fact does have a home, and who is happy for your shirt’s relative newness.

Her skirt will be African technicolor. Her shirt will be grey jersey knit. Her wardrobe will be hybrid, reflecting a shift that the controversial injection of American t-shirts brings to African fashion.

Only a small fraction of all clothing donated to thrift stores such as Good Will ever stays in the United States. Pietra Rivoli, in The Travels of a T-Shirt in the Global Economy, reveals, “The Salvation Army at one time tried to sell all of the clothing in its stores or to give it away, but the supply now so far outstrips demand…There are nowhere near enough poor people in America to absorb the mountains of castoffs, even if they were given away.” According to the Office of the U.S. Trade Representative, used clothing was the 5th largest import to Senegal from the U.S. in 2009, clocking in at $7 million. 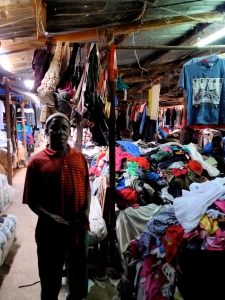 A vendor inside the fookijaay in Kolda

In my daily life in Kolda, second-hand clothing is everywhere. The “fookijaay,” the Wolof word for “thrift market,” is a hub of economic activity in the city center. In Wolof, “fookijaay” literally means “shake out” and “sell.” There is a fookijaay in every town in Senegal. They are all over Africa as well.

Snippets of Americana, stamped on t-shirts and paraded as everyday fashion, are part of the landscape. As I bike around, I see “Bacon Eating Championship 2005,” and “I’m a Jesus Freak” advertised unwittingly by Kolda’s Muslim, sometimes illiterate, non-English speaking crowds. I see men in “Real Women Have Curves” or “Glenview High Ladies Ice Skating Team” shirts. For all the humorous out-of-context t-shirts, however, there are even more of the mundane: “Lakeside Honors Society” tops, Hawaiian shirts, and nondescript pants, shoes, and plaid button-downs.

When my host brother Aliou needed new clothes for school, my host mom took him to the fookijaay, much in the way I would have been taken to K-mart as a kid. He came back home with several almost-new items, including a ski-worthy down jacket (for those cold African 60-degree nights), and a shirt that said “People Who Think They Know Everything Annoy Those Of Us Who Do.” When I clumsily translated this phrase into Pulaar for him, he seemed nonplussed by its snarky tenor. 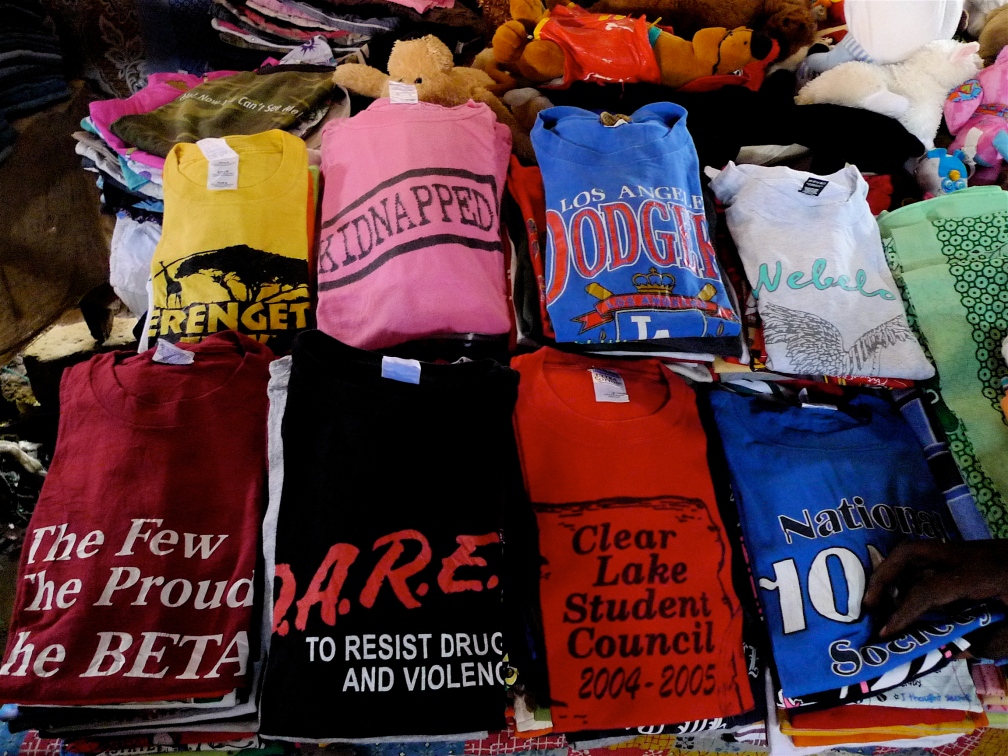 It is amazing to see how all these throw-away shirts that we so easily forget about are having second, maybe third, lives in Africa. We’ve all heard the Blue Sweater Story, or a version of it, wherein an American woman donated her childhood sweater, only to find the very same sweater on a boy in Rwanda, 11 years later, when she was working there.

This supposedly uplifting discovery, of realizing how interconnected we all are, is undercut by the fact that as many argue, the used clothing industry is destroying local textile production all across Africa. 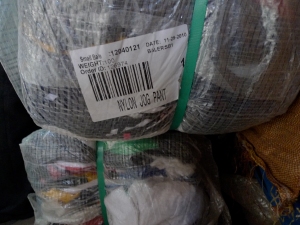 Clothing comes in packages with bar codes like this

The trade mechanism by which used clothing travels to developing countries is fascinating. At first glance, it appears that the garments arrived as an extended form of donation, as if a church group dumped massive amounts of used clothing upon Africa. Some hold the misconception that the clothing is smuggled in. But once you see the vastness of the fookijaay supply and its organized packaging, it is clear that used clothing is a complex global industry in itself.

Rivoli writes of the Trans-Americas Trading Company, a large factory in New Jersey, as an example of the type of middleman that facilitates the used clothing trade. TATC purchases clothing from charities in the New York metro area, and processes tens of thousands of pounds of clothing per day. The method is straightforward: truckloads of garments arrive at the factory, which then travel on conveyor belts and are hand-sorted by employees. Some clothing is deemed vintage and is destined for European or Japanese markets. Less fortunate threads are literally turned into rags. 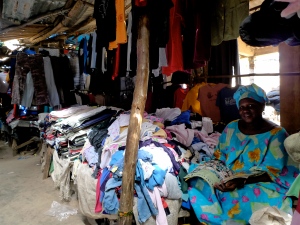 An active fookijaay merchant, this woman chooses to wear a Senegalese complet instead of second-hand clothing

I have seen the storage room at the fookijaay in Kolda where these bales are opened for the first time and subsequently sorted through. Merchants there say everything comes from Dakar. Though I protested that it seems like the clothing has been sitting there for ages, vendors insisted that shipments arrive a few times per month, and most of the clothing is turned over in that time. The clothing winds up on massive tables in each vendor’s territory, some collections more orderly than others. Much of the market consists of chaotic mountains of clothing. The fookijaay is like one giant bargain bin—as long as you’re willing to dig, you will eventually find something you might want.

Since each item in the fookijaay is unique, it can be a thrilling, if laborious, shopping experience. It is clear that my co-shoppers in the fookijaay love the treasure hunt appeal as much as I do. The other day, I browsed alongside several young women, who were happy to fish ballet flats out of the heaps of shoes on a table. Their skinny jeans and tight, bright tank tops were probably Chinese-made and new, whereas their shoes and purses were distinctly American, guaranteeing that these particular accessories couldn’t be copied by their friends. 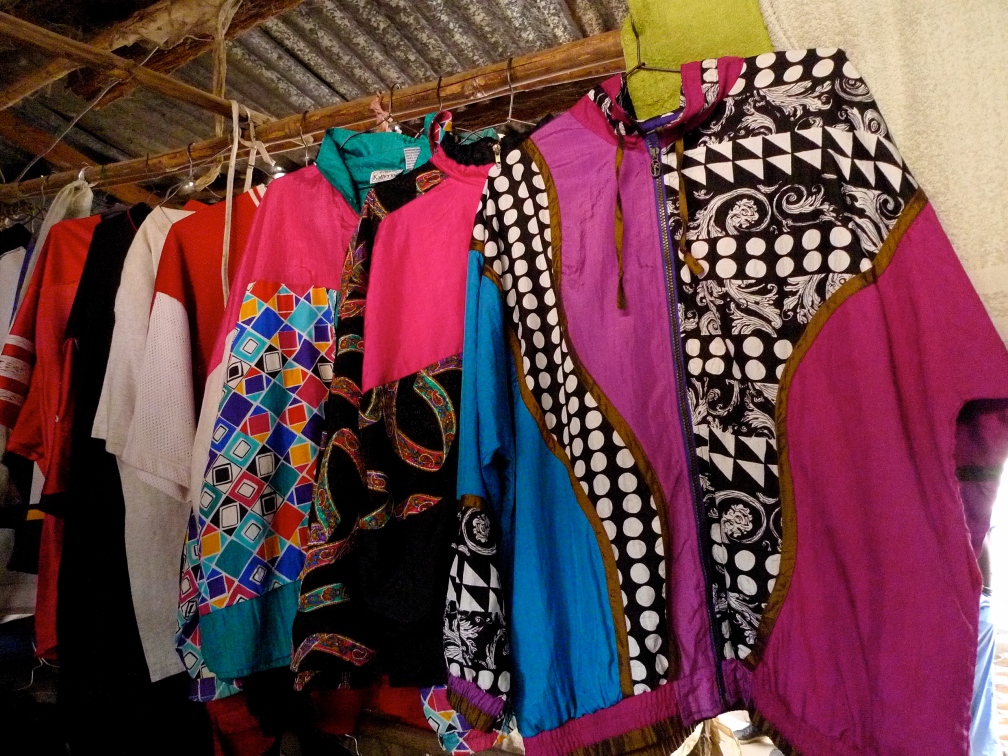 There is amazing retro 80′s and 90′s attire available for purchase. Somehow countless colorful track jackets, neon floral shorts, and snappy purses slipped through the cracks at the donation stations in the U.S. and ended up here. The 80′s vintage-like clothing I find here is in abundance, since Senegalese people tend to prefer cleaner colors and newer-looking items. Thus, I am afforded an extravagant thrift store experience, where retro-fabulous clothing for $2 or less is everywhere, a far cry from the picked-over bins in hipster meccas like Williamsburg, Brooklyn. 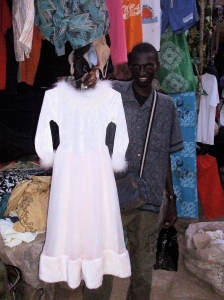 This little girl’s Snow White costume was described disturbingly to me by a vendor as a “possible wedding dress” for a girl.

Plenty of Senegalese people, especially women over the age of 40, and men over the age of 50 or 60, still wear traditional head-to-toe garments in colorful African fabric. But the apparent age divide highlights a new reality in clothing choice: the polychromatic traditional costumes are being reserved for special occasions, religious days, and old age. Young people, in step with European and American fashion, prefer jeans and tees, jumpsuits and power suits.

Conventional Senegalese attire, with its billowing fabrics, sculptural head wraps, and unapologetically bright colors, is maybe being re-imagined as too old-school, costume-like, and perhaps too psychedelic. Further, a fashion split can be seen along gender lines. Men more commonly wear Western clothing, perhaps because they have more disposable income than women and can afford attire deemed to be “modern.” Men are allowed more freedom in what they can wear, an added perk of their higher social standing. Women, who are less financially able to update their closets and are also expected to retain their collective mother/wife image, tend to wear snazzy Senegalese traditional wear, year after year.

This approximation of Western style comes as a blow to local garment industries. It also means dingier hues across the Senegalese color palette. But perhaps Senegalese consumers like the mishmash options in their markets, allowing them inexpensive access to comfy Western thrift. The infusion of American t-shirts into the fashion algorithm has no doubt brought a certain casualness and experimentalism to the über-vibrance of Senegalese couture.

(On the flipside, the American store Anthropologie is selling a $68 shirt that is described as “African-inspired” and looks unmistakably like Senegalese wax fabric that I could buy in the market here. Picture below.) 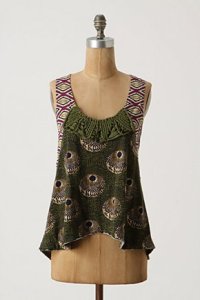 Can you believe it??