The Peace Corps slogan, “The toughest job you’ll ever love,” is sometimes played upon by cynical volunteers, re-purposed as, “The toughest job you’ll never do.” This is because a lot of our work is simply trying to find sustainable work, often in vain. The dirty little secret of development work is that it takes a really long time to identify how a job can be done properly in a foreign country, taking into account local culture, economics, work incentives, and more. You can’t just take a bunch of money and sprinkle mosquito nets down upon people like fairy dust and expect people to use them (sorry, Ashton Kutcher, and the countless celebrities that have re-colonized Africa).

Given this, it is a real relief when you do find a project that seems to be self-sustaining, and when you are working with people who are truly self-motivated (rather than seemingly self-motivated simply to put on a show for you so that you will give them more grant money). Maybe I sound like a Scrooge, but it’s only because so many locals have approached me as if I am Santa Claus. Perhaps it’s just Senegalese culture, in which it is not considered rude to ask for something outright (“give me your bike” roughly translates to “you have a nice bike”), but locals will straight up ask me for money, pointing to my white skin as an obvious reason why I should shower dollar bills upon them with reckless abandon. They do not seem to realize that such an action would be against their own self-interest in the long run.

The campus of the District Sanitaire, Kolda

This is why I’m happy about the hospital garden. Located at the District Sanitaire in Kolda (essentially, a clinic where you can go to the dentist, have consultations, and even have a baby), the garden was started a few years ago as an AIDS garden by an NGO that has since abandoned the project. There remain two hardworking women, Manssata Kondira and Fatou Mbiaye, who come a few times a week to continue gardening. The director of the District Sanitaire, Dr. Touré, mentioned to Peace Corps that he wanted to re-start the garden. The inspiration for this is likely due to the success of garden at Hôpital Fann in Dakar, a project that generates vegetables to supplement the diets of hospital patients and is run by hospital workers. The Hôpital Fann garden is a beautiful place to visit, not only for its experimentation with new techniques, but also for the fact that it is nourishing the inhabitants of the Department of Infectious Diseases next door. The First Lady of Senegal Viviane Wade, as well as former First Lady Laura Bush of the U.S. have visited the Hôpital Fann and its garden. Due to its good P.R., many hospital directors around Senegal now want to have their own hospital gardens.

Several weeks after I heard that Dr. Touré was interested in re-starting the garden, I paid him random visit and introduced myself. I started casually meeting in the garden with the women, who were initially wary of me. After a few weeks, I sat down with Dr. Touré again and asked him what his vision for the garden was, why he wanted me involved, and what he was willing to contribute to get it up and running again. I asked him outright if he would pay for all the improvements, yet felt nervous about it, maybe because I’ve been conditioned to feel sheepish about asking for things like money (or in the American context, a raise). Shockingly, he agreed for the District Sanitaire to pay for all its renovations and has not once asked me to inject my own grant money into the project. Though the process is slow, they are paying for new fencing, fixing the robinet (water tap), seeds, and will hire one of the hospital workers to water the garden during the dry season. This is one of the most vivid times I’ve felt like the catalyst I am supposed to be: guiding a project, without handing out money. Don’t get me wrong, the garden still looks pretty dilapidated, but it is in much better shape than it used to be. More importantly, no one expects me to swoop in with a wadful of cash. I just sort of show up with my hand hoe, help out, and suggest things that they could be doing.

Dr. Touré and I decided to re-brand it as a “health garden” since many people in Senegal living with HIV/AIDS (the percentage of which is nowhere near the levels of southern Africa) do not want to openly be involved in an AIDS project. The taboo, here as elsewhere, is still strong. I think the original NGO who helped with the garden focused on AIDS because it is such a buzzword in Africa. In reality, Senegal has one of the lowest HIV/AIDS rates in Africa (0.8%, 2003 estimate, compared with a U.S. rate of 0.6%) and there are bigger killers in Senegal, such as malaria. Besides, anyone involved in the hospital, whether or not they have HIV/AIDS, is welcome in the garden. 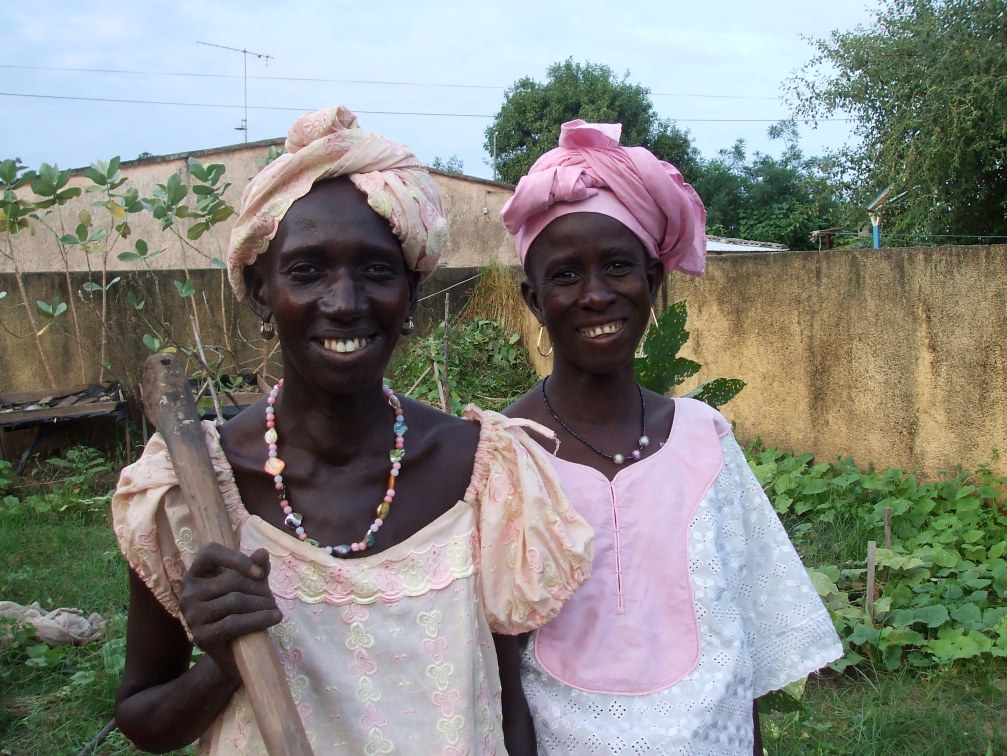 I show up at least twice a week, Monday and Wednesday evenings, to work with the women in the garden. I really like this structured time to my week. It took me a couple months to realize that neither of the women can tell time, and although they know how to say and agree to meet at “dix-sept heure,” they cannot actually read “17:00” on their cell phones. Knowing this, I am now less annoyed that I have to call them when I am leaving my house, so that they know they should leave their houses then too. These two women are among the few people I work with who I cannot speak a word of French to (except for borrowed French words, like “robinet” for which there is no Pulaar equivalent), because neither of them have ever gone to school. Since I live in a city, this is fairly rare. Instead, we speak Pulaar to each other, an adopted language for all of us (their native language is Mandinka).

The other day I showed them how to start seeds for a pépinière (nursery), though I still remain skeptical as to whether they in fact have never done one before, as they professed. We are preparing for a training at the District Sanitaire that my counterpart and I will conduct soon on soil preparation, transplanting seedlings, and composting. I hope that the training will re-introduce the garden to the hospital community as a place they can come to hang out and practice gardening. The hope is that they will then grow vegetables in their own homes, leading to a healthier diet.

I do not know yet whether the health garden will be a big success, or a big flop like many development projects. But for now, I like my Mondays and Wednesdays with Fatou and Manssata, and I hope the hospital will keep investing in its own improvement.

One thought on “The Health Garden”