I spent Christmas and New Year’s in Saint Louis, a coastal town in the north, the former capital of Senegal. It has a French version of an old Havana feel, not that I have ever been to Havana. There are lots of peach-colored colonial buildings with wrought-iron balconies and cracked paint. There are palm trees, long fishing boats, and jazz happenings. It is one of the most advocated tourist destinations in Senegal, erroneously leading me to believe it would be Disneyland-ified, or else, just strangely clean and beautiful. And in many ways it is pristine—there are trash cans (did you know, there exist receptacles where people intentionally put their trash?), ornamental plants, and other attempts at public aesthetics. But there is still a grittiness to Saint Louis—the questionable restaurant bathrooms, the roaming children, the bursting marketplaces on either side of the main island—that reminded me, thankfully, that I was still in Senegal. For a Peace Corps volunteer, Saint Louis is an ideal vacation spot: there is pizza with real mozzarella cheese, outdoor eating, bars with live music, burgers (nice!), places to promenade, beaches, and gnocchi. For a typical American tourist, I think Saint Louis would be a fun colorful adventure, but not necessarily a luxurious and comfortable getaway. Which is why I’m so happy my American family, understanding this, is still so excited to come visit me.

There is a fair amount of guilt involved in me taking a vacation, just like the guilt I have by refusing to give money to people who beg or who clearly need cash (believing in “the bigger picture”), yet I obviously have enough money to have beers with friends and to… take a vacation. I never meant to spend a full two weeks away from my site, but since I was coming all the way from Kolda and going to the opposite side of the country, it seemed like a good idea to make the most of the long car rides involved rather than turning back home after just a few days. Isn’t it interesting that I left the world of I’m-not-checking-my-BlackBerry-enough vacation guilt in New York only to enter the realm of developing-country volunteer vacation guilt? But let’s not focus on regrets. I am still in the process of finding balance. 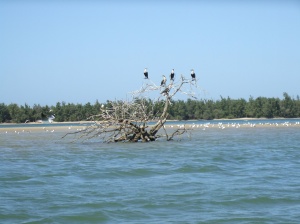 I met up with eleven other good friends from my “stage,” or training group. I called it the Unofficial Saint Louis Ag Summit because we all happened to be agriculture volunteers. Together we went birdwatching at the Parc National de la Langue de Barbarie, a waterfowl destination toured only by boat. Being that Senegal and the Gambia are known as major birdwatching sites, we had hopes of seeing some fine feathers. However, after a few hours meandering through the estuary in a pirogue (a motored fishing boat, like a large canoe), we snapped photos of some seagull-like flocks and not much else. Birds, it would seem, have exciting lives of their own and cannot be expected to spend New Year’s under zoo-like observation. The day was punctuated by an impromptu dip in the ocean, a lazy afternoon drinking Gazelles, and an encounter with a group of young men with Scottish accents doing a drive from England to Cameroon.

We saved money by spending half of the nights at the Saint Louis regional house, which is really just an apartment on the water that the Peace Corps somehow pays for. There, we made a lot of food ourselves. The Christmas menu included baked egg puffs with tomatoes, onions, and peppers; grilled fish and shrimp; potatoes; hot salsa; and botched chocolate chip cookies. Our ATM cards were put to more use once we moved to the cheap huts on the beach, not because of lodging costs, but because without a kitchen we were forced to eat on the town most of the time. And thus the splurges on Vietnamese food, Hawaiian pizza, french fries, chawarma, overpriced beers, and so many other mundane gastronomical gems.

Ben dancing with a serenader

One night, we were invited to a divey performance space lit by candles and were serenaded by musicians with Rasta sensibilities that extended beyond music taste. They coaxed us into dancing and singing along to slightly corny lyrics like, “Africa, Africa, Africa want to be free.” It was quite a night. Saint Louis was also the setting for long walks, mirrored nightclubs, and a chance to learn a little Wolof.

It is worth noting that all this was funded by our normal Peace Corps salaries. I am starting to realize that Peace Corps knowingly gives us enough money to have a little fun—not because we need every last CFA, but so that we’ll stay. As much as each of us entered this intense adventure fully prepared to live in an isolated village with no disposable income—and if that were the case, I would still stay—Peace Corps must factor in that everyone needs a little release, and they would lose too many volunteers to cabin fever if they did not give us a healthy amount of wiggle room.

Wandering the streets of the old city

My return home to Kolda involved a two-day detour in Thiès to visit my good friend Emily. This was a perfect opportunity to stock up on solid Emily time, deodorant, and other rare goods only a big city can afford. I then made my way to Dakar for half a day, wound up at a gathering of some third-year volunteers at their apartment in the city, and then took a car down to Kolda. I was lucky to meet up with a researcher from Human Rights Watch who was en route to Kolda for work on children’s rights issues, because the ride through the Gambia is best tackled along with someone else. After being stopped multiple times by Gambian authorities and exiting the car to stand on the slow ferry across the Gambia river, it was impossible to approximate sleep each time I crawled back into the car. Sept-places (seven seaters) are by far more comfortable than taking large vans to travel, but there is a definite hierarchy in seating. When sitting shotgun or in the middle of the car, one can recline blissfully, but when in the back, as Matt the researcher and I were, the high floor requires being permanently molded into the fetal position, which, comforting as must be somewhere in our psyches, is not a great way to spend a 13-hour road trip.

However, once I actually arrived home and was able to peel my heavy duffel bag strap from across my neck, it all felt worth it. I was so relieved to be home, to be biking around town again, to be joking with my family, and for once in two weeks to not spend any money. I saw how my flowers in my little yard had grown, and how in turn Fernando the little lamb had gotten bigger. Being away re-energized me for the work I need to do here. Other parts of Senegal are a lot of fun, but I am so lucky that my home is Kolda.